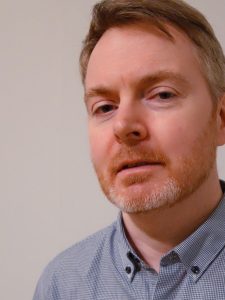 ‘Mainstream traditional publishing is focused on making money. I mean, Ronnie O’Sullivan? I love watching him play snooker but I won’t be going out to buy his novel.’

Today I talk to short story writer, poet and debut novelist Neil Campbell. Neil has published three collections of short stories – Ekphrasis, Broken Doll and Pictures from Hopper – as well as two poetry chapbooks – Birds and Bugsworth Diary. More recently, he published his first novel, Sky Hooks, about a young warehouseman whose promising football career is cut short by injury. Neil was the editor of the literary magazine Lamport Court from 2003–2008 and has an MA and an MPhil in Creative Writing. His short stories were chosen for Best British Short Stories 2012, 2015 and 2016.