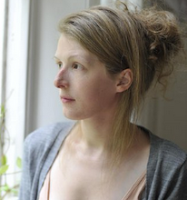 Today I’m talking to Jen Campbell, the author of the bestselling ‘Weird Things Customers Say in Bookshops’ and also, now, ‘The Hungry Ghost Festival’ – her first collection of poetry, which has just been published by The Rialto.
AJ: Hi Jen, thanks for talking to me. Congratulations on The Hungry Ghost Festival, which I found to be a really engaging and poignant collection of poems. Can you tell us a little bit about how the collection came about and how long you worked on it for?
JC: Thanks, Andrea! I think the poems span over two years, when you look at them from start to finish. I didn’t deliberately set out to write a collection about the north-east, and my childhood, but I began to notice that the poetry I was writing tended to fall into one of two categories: one of those was a nostalgic/north-east/childhood/sea-memory type, and the other concerned freak shows, deformity and identity. The latter’s a longer collection I’m working on at the moment.
‘The Hungry Ghost Festival’ is not about what actually happened when I was younger; it’s often not even about real places. It’s about misremembered and strange things. It’s about girls praying to The Angel of the North. It’s about the idea of a mermaid born in the river Tyne. It’s about another girl who’s bullied for being a ‘real-life mermaid.’ It’s about Chinese lanterns, teenagers at the beach, and a family who run a sacred farm. It’s about lots of things.
AJ: ‘The Hungry Ghost Festival’ is a Chinese festival which is held on a night where it is believed the boundaries break down between the living and the dead (and the dead visit the earth looking for food and entertainment). In your collection you explore a similar idea with the past and the present, but in your hands memories of childhood and childhood events become magical, almost fairytale-like, and we even see fragments of fairytales and children’s rhymes appearing in some poems. In ‘When We Found The Tide’, we think of the owl and the pussycat with the line ‘That this water is the sea and the lawn our pea-green boat’. And in ‘Gambit’ you mention ‘trailing breadcrumbs’. Can you talk a little more about fairytale and folklore as inspirations in your work? 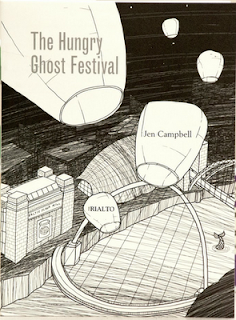 JC: I hold my hands up; I am enthralled by fairy tales, especially the sordid pasts most of them seem to have. I find it fascinating that we’re brought up with them when a lot of them have extremely dark connotations. I suppose that’s also part of it; we accept fairy tales when we’re younger; we accept Disney’s version of events. I’ll never forget the first time I read Peter Pan myself and realised that the Disney film is really not what Barrie had in mind. I’m talking about Hook being ‘obsessed’ with Wendy; I’m talking about Tink stumbling home from orgies (yes, orgies). I don’t remember that in the animated film, ha! So, yes, I suppose I associate fairy tales with growing up, and looking back and seeing things slightly differently, which is what this collection is all about, too. Mermaids and selkies feature in this collection a few times; growing up by the sea meant I was especially interested in folklore associated with water.
AJ: The collection has a strong sense of place, being set, on the whole, in the Newcastle area. There is the Angel of the North, of course, and the speech (‘bairn’) and, for example, in ‘Written in my 1999 Diary: Newcastle Futures’, there are the lines: ‘Wind farms/of hands which turn but don’t make bread’ (a beautiful image by the way). Can you talk about the importance of place in your work?
JC: I find it easier to talk about places and things I’m now distanced from. I think most of us find that, perhaps because the feelings associated with those things have had time to settle. Whenever I’ve tried to write about something happening now, something I perhaps haven’t come to terms with yet, it all gets a bit angst-y and, well, it’s not very good. All my family still live in the north-east, so I do go back and visit often, and I feel a strong connection with the place. I never used to like the Angel of the North (we called it ‘Old Rusty’), but my relationship with it has changed somewhat, mainly because I feel like it’s now a symbol that welcomes me home.
AJ: Water is very present in the collection – the sea, mermaids, fish, starfish, seagulls. Do you feel you have a strong connection to the sea, especially with regard to childhood?
JC: I went swimming a lot when I was younger, but I don’t think that’s why I feel such a strong connection with the sea and water. I used to walk along the coast, as a teenager, and write about it. One of my first published poems, when I was thirteen, was about a love affair between the sea, and the shore. I have a lot of respect for it; the power that the sea has, and I love the way that you can walk along the same bit of coast and it’s never the same to look at. I also, bizarrely, feel some connection with it because I have ectrodactyly. That’s ‘Lobster Claw Syndrome’ by it’s rather coarse nickname.
AJ: The language in the collection is beautiful – unusual and striking. For example, in ‘Angel Metal’ you say winter scarves over faces ‘catch our breath/like cloth balloons’, or in ‘Like a Fish Out’ there’s ‘sun light-bulbing on a netball pitch’. Have you always loved being inventive with language?
JC: Yes. As far as I can remember, I’ve always wanted to be a writer (apart from a very brief period when I was seven and I was utterly convinced I wanted to be a lollipop lady). Because of the afore mentioned ectrodactyly, I spent a lot of time in hospital when I was younger and devoured book after book. I was told I wasn’t going to be able to physically write, so I stubbornly disagreed and vowed to write more than anybody else. That’s how I fell in love with words: practise, lots of reading, and stubbornness.
AJ: I found some of the poems to be quite moving. In ‘The Angel’, which relates to the Angel of the North, the final lines really caught my attention: ‘Her arms reach out to touch the sky./I think she does not touch it.’ When I read this I felt a sense of sadness, of things being unattainable, of dreams not being reached. Is this poignancy something you’re aware of in your work?


JC: I’m glad you found the poems moving. As for my awareness of unattainable things, I’m not aware of dreams not being reached, but definitely of a sense of loss. However, whilst the collection is about the riverside and rumours in the hills, and falling in love with someone you’re not supposed to be found with; it’s also about whatever you, and other readers, want it to be about. Poems are like birds; you’ve got to let them fly.
AJ: Thanks for talking to me and good luck with the collection.
JC: Thank you!
* Jen Campbell, 25, grew up in the north east of England, and graduated from Edinburgh University with an MA in English Literature. She now lives in London where she runs an antiquarian bookshop. Her first book, ‘Weird Things Customers Say in Bookshops’, was a Sunday Times bestseller, and her first poetry collection, ‘The Hungry Ghost Festival’ is published by The Rialto.
* To watch Jen read a poem from her collection, click here. Follow her on Twitter, go to her blog, buy ‘The Hungry Ghost Festival’ (or here for a signed copy), or click here for more on ‘Weird Things Customers Say in Bookshops’.