There seems to be a bit of a buzz about bookshops at the moment – those independents which are bursting with individuality and character as well as offering a great selection of reads. The first thing I noticed was The Guardian’s Independent Bookshop guide back in September. Then there was a post by Jen Campbell saying she wanted to write a series of ‘spotlights’ to help spread ‘the joy of physical bookshops’. You can read the first of her posts about Ripping Yarns here, the bookshop where Jen herself works.

Then there was this on Flavorwire showing photos of what were declared to be ‘The 20 Most Beautiful Bookstores in the World’. Of these my own particular favourites are Barter Books, Alnwick, the famous Shakespeare & Company in Paris and the Cafebreria El Pendulo, in Mexico City, Mexico, with its stacks of books, greenery and a winding staircase. I can only hope I get to see a few of them in the flesh one day, if not all of them.

Following on from this, Sarah Crown in The Guardian took the Flavorwire piece as a starting point for a post about her own favourite bookshops while encouraging readers to nominate theirs. The Guardian has since set up a Flickr group so people can share photos of those shops most dearest to them.

As for me, a beautiful bookshop I’ve visited recently is The Whitby Bookshop with its great selection of books, audiobooks, cards and gifts. 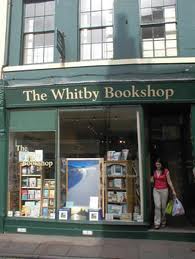 It’s a fairly small shop over two floors – with a lovely, creaky, wooden staircase up to the next level – but I still managed to spend a good hour or so in there browsing. And there were plenty of bargains to be had among the more expensive books. I think I spent just over £10 and came away with a couple of books (one of which was a hardback) as well as two audiobooks. So if you’re in Whitby it’s well worth going in for a visit on your way to the Abbey. (Pop into Sherlocks for tea and cake while you’re there too.)

One of my favourite bookshops is from the world of film. It’s the Pageant Book & Print Shop which makes an appearance in Woody Allen’s film ‘Hannah and her Sisters’. Have a look at it here in this key scene (and keep watching to hear Barbara Hershey’s wonderful reading of an ee cummings poem). It was a real shop at the time of filming but sadly it appears to be just a virtual one now.

But what’s causing the buzz? Are we suddenly realising how precious such places are to us and how easily they could disappear if we don’t visit them? Are we addicted to the thrill of discovery, which only really comes when running your eyes along rows and rows of book spines? Are we just desperate for the physical experience of picking up one book after another and flicking through them before deciding whether we want to buy or not? Have we already grown tired of online bookshops because they can only offer us products and not an experience? I’d love to hear what you think.