These were, of course, the words uttered by Apollo 11 astronaut Neil Armstrong after the Eagle lunar module landed on the moon during that first manned mission in July 1969. And while my own little ‘landed eagle’ is not as momentous a global event as that, to me it is pretty momentous – my book ‘Somewhere Else, or Even Here’ has landed in the offices of my publisher, Salt. I am now a published author. 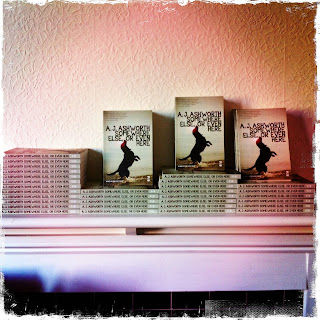 Being published – having my own, actual book in print – is a dream I’ve held for a long time. Often, I didn’t think it would ever happen for me. I always hoped it would. And, happily, the day has finally arrived when it has. The dream has become a reality, thanks to Jen and Chris Hamilton-Emery of Salt. So, even though there won’t be people lining the streets, waving flags, or any monuments built in my honour this is still a big day for me. A small step and a giant leap all rolled into one. There are still the footprints of astronauts up on the moon – thirty years or so after they were first left there. I can only hope my own book leaves its mark on the world in its own small way – its own little footprint, which will hopefully still be there in years to come.

4 thoughts on “The eagle has landed”