A couple of weeks ago I went along to the launch party for Vanessa Gebbie‘s novel ‘The Coward’s Tale‘. This exciting event was held in London – in the beautiful Daunt Books in Marylebone High Street – and was organised by Vanessa’s new publishers, Bloomsbury.

There were lots of guests there – all willing to raise a glass or two to Vanessa – including Maggie Gee and her husband Nick Rankin, David Gaffney, Tania Hershman, Elizabeth Baines, Adam Marek and fellow Scott Prize winner Jonathan Pinnock. (I actually saw regular New Yorker contributor Tessa Hadley in the street beforehand and wondered if she might be there but she wasn’t.)

Vanessa’s agent Euan Thorneycroft was also there, as was her editor Helen Garnons-Williams, who gave a lovely speech during the event saying that she loves the novel so much that if she starts reading it, she gets lost in it and forgets to get on with her other work. Then Vanessa spoke to say thanks to numerous people who helped during the course of writing the book including Maggie Gee, her agent and family. Here are a couple of hastily snatched photos from her speech: 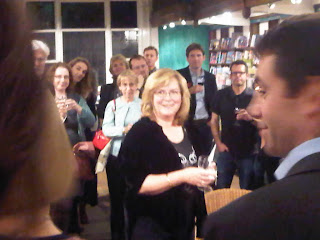 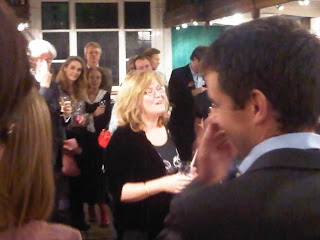 But it was all over too quickly and I had to make a dash for the train. A really great event though and I understand lots of copies of Vanessa’s novel sold on the night which is great. I’m looking forward to reading my signed copy soon. And from all the great reviews it’s getting, it looks as if this is one book which is really going to make a name for itself.